There is no other option. You must BASK IN THE GLORY of @RealKeithLee! #WWENXT @DijakovicWWE pic.twitter.com/YZ9paSVkfY

Conti talks smack to Kai. Conti slaps Kai in the face. Kai responds with a Pump Kick. Conti knocks Kai off the top turnbuckle. Conti kicks the left shoulder of Kai for a two count. Conti repeatedly kicks Kai in the face. Conti ducks a clothesline from Kai. Conti with a Judo Toss. Conti follows that with a Spinning Heel Kick for a two count. Conti toys around with Kai. Kai nails Conti with a Hook Kick. Kai with a straight right hand. Kai has Conti draped across the ring apron. Kai with a Running Pump Kick. Kai delivers The Axe Kick to the lower back of Conti. Kai unloads a flurry of kawada kicks. Kai connects with The Face Wash. Kai plants Conti with The GTK to pickup the victory.

– There will be limited commercial interruption during next weeks edition of NXT.

Third Match: Matt Riddle vs. Killian Dain in a Street Fight. The Winner Will Battle Adam Cole Next Week For The WWE NXT Championship

Bodyshot Exchange after the bell rings. Riddle is throwing forearms at Dain. Riddle fights out of the fireman’s carry position. Riddle applies The Kimura Lock. Dain dumps Riddle out of the ring. Riddle tackles Dain. Riddle transitions into a ground and pound attack. Riddle rolls Dain over for a two count. Dain kicks Riddle in the gut. Dain goes for The Samoan Drop, but Riddle lands back on his feet. Dain avoids The Ripcord Knee Strike. Riddle with an OverHead Kick. Riddle follows that with a Bridging German Suplex for a two count. Riddle delivers The SuperMan Punch off the steel ring steps. Dain responds with a ShotGun Dropkick on the floor. Dain regains control of the match during the commercial break. Dain levels Riddle with a Body Avalanche. Dain is choking Riddle with his knee. Riddle with a Final Flash Knee Strike. Riddle with Two Flying Forearm Smashes. Riddle with The Exploder Suplex.

Dain and Riddle are brawling in the crowd. Riddle with Three Mid-Kicks. Riddle dumps a chair on top of Dain. Riddle slams Dain’s head on the table. Riddle blasts Dain with a knife edge chop. Dain rakes the eyes of Riddle. Dain slams Riddle’s head on a production crate. Dain talks smack to Riddle. Riddle with forearm shivers. Dain puts Riddle through a wall with The Divide. Coming out of the commercial break, Riddle nails Dain with The PK. Riddle delivers another BROTon through the table. Absolute chaos in Full Sail University. Riddle continues to kick Dain in the chest. Riddle rolls Dain back into the ring.

Riddle with a SlingShot Senton Splash for a two count. Riddle grabs the chair. Dain hits The Divide. Dain kicks Riddle in the back. Dain with The Trifecta Vader Bomb for a two count. Dain hits Riddle with a kendo stick. Riddle PowerBombs Dain on the chair. Riddle follows that with a Chair Assisted Final Flash Knee Strike for a two count. Riddle whips Dain with the kendo stick. Riddle transitions into a ground and pound attack. Dain targets the midsection of Riddle. Riddle with combination forearm strikes. Dain HeadButts the midsection of Riddle. Dain with a forearm smash. Riddle makes Dain tap out to The Fujiwara Arm-Bar.

Lorcan and Martel will start things off. Collar and Elbow Tie Up. Lorcan backs Martel into the turnbuckles. Lockup in the center of the ring. Martel applies a wrist lock. Lorcan reverses the hold. Burch tags himself in. Double Chop. Burch applies a wrist lock. Martel drives his knee into the midsection of Burch. Martel tags in Parker. Burch with a side headlock takeover. Parker drops down on the canvas. Burch trips Parker in mid-air. Burch uppercuts Martel. Burch tags in Lorcan. Double Side Russian Leg Sweep. Martel dumps Lorcan out of the ring. Parker tags in Martel. Martel rolls Lorcan back into the ring. Martel transitions into a ground and pound attack. Martel slaps the back of Lorcan’s head. Martel tags in Parker. Parker kicks Lorcan in the face for a one count.

Parker with a Snap Vertical Suplex for a two count. Parker applies an arm-bar. Parker with an arm-ringer. Parker tags in Martel. Martel with a Pendulum BackBreaker for a two count. Parker tags himself in. Ever Rise hits their BackBreaker/Running Knee Strike Combination for a two count. Parker applies a front face lock. Lorcan backs Parker into the turnbuckles. Martel tags himself in. Following a snap mare takeover, Martel applies a top wrist lock. Martel clotheslines the back of Lorcan’s. Miscommunication by Ever Rise in the corner. Lorcan tags in Burch. Burch with two haymakers. Burch uppercuts Parker. Burch with a corner clothesline. Burch with a Step Up Enzuigiri. Burch delivers a Missile Dropkick. Burch HeadButts Martel. Burch plays to the crowd. Burch tags in Lorcan. Burch and Lorcan plants Parker with The Assisted DDT to pickup the victory.

It's all about DISSECTING your opponent for @CGrimesWWE as he takes it to @RaulMendozaWWE on #WWENXT! pic.twitter.com/3dBnzzmgN7

Kushida and Aichner will start things off. Standing Switch Exchange. Aichner with a waist lock takedown. Aichner kicks Kushida in the gut. Aichner punches Kushida in the back. Aichner repeatedly stomps on Kushida’s chest. Kushdia reverses out of the irish whip from Aichner. Kushida with a Hip Toss. Kushida follows that with a Cartwheel Basement Dropkick for a two count. Kushida applies an arm-bar. Aichner tags in Barthel. Aichner hits The PK. Barthel drops Kushida with The PK. Barthel with a Reverse PowerSlam. Barthel tags in Wolfe. Wolfe with a Bridging German Suplex for a two count. Wolfe taunts Breezango. Wolfe goes for The Canadian BackBreaker Rack, but Kushida lands back on his feet. Kushida tags in Fandango.

Fandango with a SlingShot Sunset Flip for a two count. Wolfe kicks Fandango in the gut. Wolfe goes for a Bodyslam, but Fandango lands back on his feet. Fandango dropkicks Wolfe for a two count. Fandango has Wolfe draped across the top rope. Fandango tags in Breeze. Stereo Boots for a two count. Breeze applies a front face lock. Breeze with a Snap Vertical Suplex. Breeze with a leg drop for a two count. Wolfe drives Breeze back first into the turnbuckles. Wolfe tags in Aichner. Breeze SuperKicks Aichner. Breeze is distracted by Barthel. Wolfe uppercuts Breeze behind the referee’s back. Aichner launches Breeze over the top rope. Aichner tags in Barthel. Barthel with a Running European Uppercut on the floor. Imperium starts cutting the ring in half.

Barthel transitions into a ground and pound attack. Barthel HeadButts Breeze. Barthel stomps on the midsection of Breeze. Barthel tags in Wolfe. Wolfe with a knee lift. Wolfe applies the cobra clutch. Breeze with shots to the midsection of Wolfe. Breeze punches Wolfe in the back. Wolfe responds with a BackBreaker. Wolfe tags in Aichner. Aichner delivers a gut punch. Aichner gets Breeze tied up in the tree of woe. Aichner tags in Barthel. Stereo Basement Dropkicks. Barthel with a straight right hand. Barthel rolls Breeze back into the ring. Barthel stands on the left writ of Breeze. Barthel tags in Wolfe. Wolfe stomps on Breeze face. Wolfe tags in Aichner. Aichner drops Breeze with The Pump Kick. Aichner uses the bottom rope as a weapon. Aichner with a Back Drop Driver for a two count. Aichner tags in Barthel.

Barthel with two uppercuts. Barthel applies the cravate. Following a snap mare takeover, Barthel with a running european uppercut for a two count. Breeze needs to create separation. Barthel with a knee lift. Breeze is displaying his fighting spirit. Breeze sends Barthel crashing to the outside. Barthel stops Breeze in his tracks. Breeze ducks a clothesline from Barthel. Aichner wisely pulls Fandango and Kushida off the ring apron. Barthel slams Breeze head on the top turnbuckle pad. Imperium repeatedly stomps on Breeze’s chest. Barthel is choking Breeze with his boot. Barthel tags in Aichner. Aichner toys around with Breeze. Aichner punches Kushida. Breeze creates distance with a Step Up Enzuigiri. Fandango and Wolfe are tagged in. 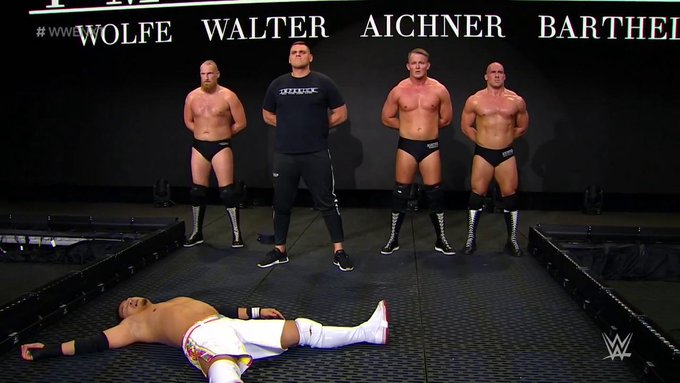 If you can please nominate The Hoots Podcast for the upcoming 2019 Wrestling Podcast Awards.