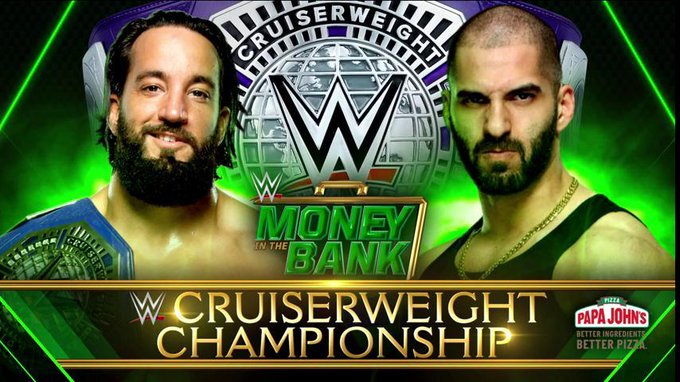 Tony Nese joins the commentary team for this match. Collar and Elbow Tie Up. Dar backs Daivari into the turnbuckles. The referee calls for a clean break. Dar applies a wrist lock. Daivari reverses the hold. Daivari pulls Dar down to the mat. Daivari is throwing haymakers at Dar. Daivari repeatedly stomps on Dar’s chest. Daivari argues with the referee. Dar trips Daivari. Dar HeadButts Daivari in the chest. Dar with a Spinning BackSlide Cover for a one count. Daivari reverses out of the irish whip from Dar. Dar dropkicks Daivari to the floor. Daivari stares down Nese. Nese with a forearm smash. Daivari slams Dar’s head on the hood of the announce desk. Daivari is choking Dar with his knee pad. Daivari drives his knee into the midsection of Dar. Daivari whips Dar back first across the turnbuckles.

Dar is displaying his fighting spirit. Daivari with a Step Up Enzuigiri. Daivari puts Dar on the top turnbuckle. Daivari with rapid fire haymakers. Dar knocks Daivari off the second rope. Dar dives over Daivari. Daivari locks in The Million Dollar Dream. Dar decks Daivari with a back elbow smash. Daivari applies a full nelson lock. Daivari drops Dar with a Reverse DDT for a two count. Daivari dumps Dar out of the ring. Daivari continues to talk smack to Nese. Daivari rolls Dar back into the ring. Dar with an inside cradle for a two count. Daivari kicks Dar in the ribs. Daivari goes for a Running Crossbody Block, but Dar ducks out of the way.

Daivari rocks Dar with a back elbow smash. Dar kicks Daivari off the second rope. Dar with two double hand chops. Dar uppercuts Daivari. Dar with a Running Forearm Smash. Dar follows that with a Northern Lights Suplex for a two count. Daivari rolls Dar over for a two count. Dar side steps The Big Boot from Daivari. Daivari goes for a Lariat, but Dar counters with The Ankle Lock. Dar negates The HammerLock Lariat. Daivari goes for The SuperKick, but Dar counters with another Ankle Lock. Daivari refuses to quit. Daivari launches Dar across the ring. Daivari SuperKicks Dar. Daivari hits The Persian Splash. Daivari connects with The HammerLock Lariat to pickup the victory.

Whenever the next opportunity comes, NOTHING will stop @_StarDESTROYER from winning the #Cruiserweight Championship! #205Live pic.twitter.com/UwEGimM8ig

Samir and Lee will start things off. Samir drives his knee into the midsection of Lee. Samir is throwing haymakers at Lee. Samir transitions into a ground and pound attack. Samir poses for the crowd. Samir tags in Sunil. The Singh Brothers with a Double Vertical Suplex. Sunil unloads two elbow drops. Sunil follows that with two knife edge chops. Sunil drops Lee with a Spinning Heel Kick. Sunil dances around the ring.

Sunil launches Lee to the corner. Kauffman tags himself in. Kauffman ducks a clothesline from Sunil. Kauffman with two haymakers. Samir kicks Kauffman behind the referee’s back. Sunil clotheslines Kauffman. Sunil tags in Samir. The Singh Brothers plants Kauffman with their BackBreaker/Flying Elbow Drop Combination to pickup the victory.

Winner: The Singh Brothers via Pinfall

– Next week on 205 Live it will be Mark Andrews vs. Jack Gallagher vs. James Drake vs. Humberto Carrillo in a Fatal Four Way Match.

Third Match: Akira Tozawa vs. Mike Kanellis in a No Disqualification Match

Kanellis dodges The Windmill Kick. Tozawa crawls under Kanellis. Kanellis with The Michinoku Driver through the trash can for a two count. Knife Edge Chop Exchange. Tozawa rocks Kanellis with a left jab. Big Boot Exchange. Kanellis SuperKicks Tozawa. Tozawa responds with The Windmill Kick. Tozawa with a Snap German Suplex with a bridge for a two count. Tozawa drags Kanellis to the corner. Kanellis with a massive haymaker. Kanellis and Tozawa are trading back and forth shots. Tozawa with a German Suplex on the ring apron. Kanellis avoids The Senton Bomb. Kanellis SuperKicks Tozawa. Kanellis goes for an Avalanche Michinoku Driver, but Tozawa counters with The FrankenSteiner through two tables. Tozawa puts two chairs on top of Kanellis. Tozawa plants Kanellis with The Senton Bomb to pickup the victory.