Daivari takes a lap around the ring. Tozawa and Metalik are double teaming Kanellis. Stereo Dropkicks. Metalik kicks Tozawa in the gut. Metalik applies a side headlock. Tozawa drops down on the canvas. Metalik goes for a HandSpring Enzuigiri, but Tozawa ducks out of the way. Metalik ducks a clothesline from Tozawa. Metalik with a HandSpring Arm-Drag TakeOver. Metalik points at Tozawa. Tozawa kicks Metalik in the face. Tozawa with a Flying Hurricanrana. Daivari clotheslines Tozawa. Daivari repeatedly stomps on Tozawa’s back. Daivari poses the crowd. Metalik with a SpringBoard Missile Dropkick. Kanellis kicks Metalik in the gut. Kanellis unloads two knife edge chops. Metalik reverses out of the irish whip from Kanellis. Kanellis launches Metalik to the ring apron. Metalik with an Apron Enzuigiri. Metalik with a Double Crossbody Block. Tozawa locks in The Octopus Stretch. Kanellis and Daivari with Stereo SuperKicks.

Kanellis putting the boots to Metalik. Daivari is choking Tozawa in the corner. Daivari bounces Tozawa’s head on the top turnbuckle pad. Kanellis with Two Vertical Suplex’s. Daivari transitions into a ground and pound attack. Kanellis floors Metalik with a big haymaker. Kanellis hits The SpineBuster. Kanellis SuperKicks Daivari. Tozawa is throwing forearms at Kanellis. Kanellis with a Michinoku Driver for a two count. Kanellis pulls Daivari out of the ring. Quick shoving contest on the outside. Daivari attacks Kanellis from behind. Daivari PowerBombs Kanellis on the floor. Daivari goes for a HammerLock Lariat, but Tozawa counters with The Windmill Kick for a two count.

Tozawa lands The Suicide Dive. Tozawa with a waist lock go-behind. Kanellis with three sharp elbow strikes. Knife Edge Chop Exchange. Tozawa drops Kanellis with a left jab. Big Boot Exchange. Kanellis goes for a SuperKick, but Tozawa with a Release German Suplex. Kanellis in the drop zone. Maria hops on the ring apron to distract Tozawa. Kanellis has Tozawa perched on the top turnbuckle. Tozawa sends Kanellis crashing to the canvas. Tozawa goes for The Senton Bomb, but Kanellis gets his knees up in the air. Kanellis hits The Rolling Cutter. Metalik with a SpringBoard Elbow Drop. Daivari dumps Kanellis out of the ring. Daivari goes on to steal the victory.

– Next week on 205 Live, it will be Humberto Carillo vs. Drew Gulak. 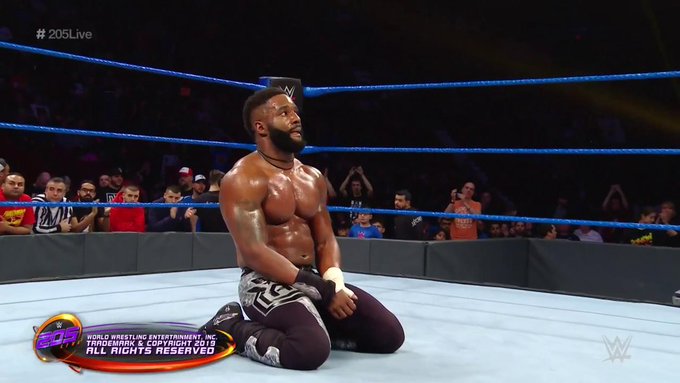