The bracket… so far! Who will get one step closer to #WrestleMania TONIGHT? #205Live pic.twitter.com/ST4qkPPst9

1st thing to know about @_StarDESTROYER: HE RULES. #205Live pic.twitter.com/ejDmJHvip3

First Match: Humberto Carrillo vs. Oney Lorcan in a First Round Match In The WrestleMania Number One Contender’s Tournament

.@_StarDESTROYER is pulling out ALL his tricks tonight in his debut on #205Live. pic.twitter.com/Ii2TjknfKt

Carillo shoves Lorcan. Lorcan fires back with three knife edge chops. Lorcan kicks Carrillo in the gut. Lorcan dropkicks Carrillo off the ring apron. Lorcan with a Snap Vertical Suplex on the floor. Lorcan rolls Carrillo back into the ring. Lorcan with Two Corner Clotheslines for a two count. Lorcan applies a sleeper hold. Lorcan unloads a heavy chop. Lorcan drops Carrillo with a Running European Uppercut. Lorcan applies a rear chin lock. Carrillo gets back to a vertical base. Lorcan with clubbing blows to Carrillo’s back. Lorcan and Carrillo are trading back and forth shots. Lorcan throws Carrillo into the top turnbuckle. Lorcan is lighting up Carrillo’s chest. Carrillo with a Spinning Back Kick. Carrillo kicks Lorcan in the chest. Carrillo follows that with a SpringBoard Arm-Drag TakeOver. Carrillo lands a Suicide Dive.

Kanellis throws his jacket at Corino before the bell rings. Kanellis is mauling Corino in the corner. Kanellis repeatedly stomps on Corino’s chest. Kanellis transitions into a ground and pound attack. Kanellis is completely unhinged. Kanellis drops Corino with an Inside Out Lariat. Kanellis plants Corino with The Reverse Swinging NeckBreaker.

Third Match: Cedric Alexander vs. Akira Tozawa in a First Round Match In The WrestleMania Number One Contender’s Tournament

.@TozawaAkira put the wheels on and got CAUGHT by the knee of @CedricAlexander… Who will move on in this tournament?! #205Live pic.twitter.com/BqCdg5TufI

Alexander kicks Tozawa out of the ring. Alexander repeatedly runs Tozawa into the edge of the ring frame. Alexander with the lateral press for a two count. Alexander goes back to the waist lock. Tozawa breaks free with clubbing elbow smashes. Tozawa ducks a clothesline from Alexander. Tozawa is lighting up Alexander’s chest. Tozawa nails Alexander with a left jab. Tozawa slides under Alexander. Tozawa with a Hurricanrana. Tozawa lands a Suicide Dive. Tozawa delivers a Missile Dropkick for a two count. Tozawa starts favoring his back. Tozawa goes for a German Suplex, but Alexander counters with a forearm smash. Tozawa locks in The Octopus Stretch. 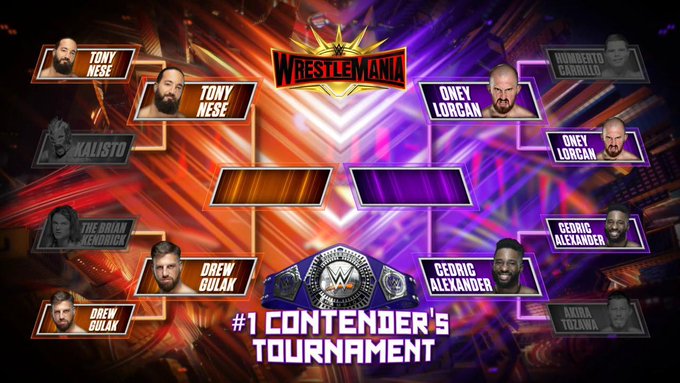