.@LEONRUFF_ puts his foot on the gas, but the POWER of @austintheory1 stops him in his tracks in this back and forth #DustyClassic battle on #WWENXT!@JohnnyGargano @KUSHIDA_0904 pic.twitter.com/o0hT7eDHFV

Leon Ruff and Austin Theory will start things off. Collar and Elbow Tie Up. Theory with a waist lock takedown. Strong lockup. Ruff applies a side headlock. Theory whips Ruff across the ring. Theory drops Ruff with a shoulder tackle. Ruff dropkicks Theory. Theory reverses out of the irish whip from Ruff. Ruff with a straight right hand. Theory goes for The ATL, but Ruff blocks it. Theory denies The Crucifix Bomb. Theory goes for a dropkick, but Ruff holds onto the ropes. Ruff with a basement dropkick for a one count. Ruff applies a front face lock. Kushida tags himself in. Double Arm-Ringer. Double Shoulder Kick. Kushida ties Theory up in a knot. Kushida drops his weight on the left shoulder of Theory. Kushida applies an arm-bar. Theory stomps on the left foot of Kushida. Theory pulls Kushida down to the mat. Theory tags in Gargano. Gargano with southpaw haymakers. Gargano repeatedly drives his knee into Kushida’s back. Gargano repeatedly stomps on Kushida’s chest. Gargano poses for the crowd. Kushida with forearm shivers. Kushida whips Gargano across the ring. Gargano holds onto the ropes. Gargano decks Kushida with a back elbow smash. Gargano tags in Theory.

Theory with a Roll Through Dropkick for a one count. Theory with forearm shivers. Theory applies a wrist lock. Theory whips Kushida into the turnbuckles. Theory stomps on the left shoulder of Kushida. Theory applies a double wrist lock. Gargano tags himself in. Gargano hammers down on Kushida’s back. Double Irish Whip. Double Elbow Knockdown. Theory repeatedly stomps on Kushida’s chest. Gargano hooks the outside leg for a two count. Following a snap mare takeover, Gargano with a low dropkick for a two count. Gargano slams Kushida’s head on the top turnbuckle pad. Gargano tags in Theory. Theory delivers a gut punch. Theory goes for a Vertical Suplex, but Kushida blocks it. Theory punches Kushida in the back. Theory goes for a Vertical Suplex, but Kushida lands back on his feet. Ruff tags himself in. Ruff with The Missile Dropkick. Ruff ducks a clothesline from Theory. Ruff with forearm shivers. Ruff thrust kicks the left knee of Theory. Theory sweeps out the legs of Ruff. Ruff with a Low Enzuigiri. Ruff slams Theory’s head on the top turnbuckle pad. Ruff knocks Gargano off the ring apron. Theory hits The Spinning Rack Bomb for a two count. Theory with a Fallaway Slam. Theory kicks Ruff in the gut. Theory is choking Ruff with his boot. Theory slams Ruff’s head on the top turnbuckle pad. Theory tags in Gargano.

Gargano with The Arm-Ringer. Gargano taunts Kushida. Gargano uses the middle rope as a weapon. Gargano applies a front face lock. Ruff with heavy bodyshots. Gargano with a Vertical Suplex. Gargano tags in Theory. Theory stomps on the left shoulder of Ruff. Theory with a forearm smash. Theory with clubbing shoulder blocks. Theory follows that with a Back Body Drop for a two count. Theory applies a rear chin lock. Ruff gets back to a vertical base. Theory with a forearm smash. Theory clotheslines Ruff. Theory applies a front face lock. Theory tags in Gargano. Following a snap mare takeover, Gargano applies a rear chin lock. Gargano repeatedly drives his knee into Ruff’s back. Ruff with elbows into the midsection of Gargano. Gargano drops Ruff with a NeckBreaker for a two count. Gargano applies a front face lock. Gargano tags in Theory. Double Irish Whip. Ruff kicks Theory in the face. Ruff launches Gargano over the top rope. Theory stops Ruff in his tracks. Ruff with a Step Up Enzuigiri. Gargano wisely pulls Kushida off the apron. The referee admonishes Gargano. Theory with a blindside attack. Theory tags in Gargano. BackBreaker/Twisting NeckBreaker Combination for a two count. Gargano tags in Theory. Theory goes for a PowerBomb, but Ruff blocks it. Ruff creates distance with The Flying Cutter.

Finn Balor, whether you want to admit it or not, you know full well that me and you are cut from the same cloth. We came from the same humble beginnings, but so here’s where we’re different. You left. I built an entire brand. I made NXT UK and what do I get as a thank you? I constantly get compared to you and what you’ve done. You told me, a lot of people want to face the champ, get in line. What do you mean get in line? I’m the real threat to you and that NXT Title. You say you don’t watch this business, but I know you’ve been watching me. You’ve been watching for years and you know as well as I do that me and you, it’s inevitable, and this time you can’t just leave. When that day comes, you will pass the torch. History is gonna speak well at you, but it’s gonna speak better at me. The day that me and you finally meet, people are gonna realize that you’re just somebody taking part in my legacy.

Adonis kicks the left hamstring of Kross. Adonis with a forearm smash. Kross is pissed. Kross with The Northern Lights Suplex. Kross with Two Doomsday Saito Suplex’s. Kross talks smack to Adonis. Kross connects with Time’s Up to pickup the victory. After the match, Kross gets Troy trapped in The Kross Jacket Choke.

You don't need friends in the #DustyClassic, you just need to want to win.

Third Match: Imperium vs. The Lucha House Party In A First Round Match In The 2021 Dusty Rhodes Tag Team Classic Tournament Match

Metalik grabs a side wrist lock. Barthel tags in Aichner. Barthel whips Metalik across the ring. Barthel drops down on the canvas. Aichner with a deep arm-drag. Aichner repeatedly stomps on Metalik’s chest. Aichner uppercuts Metalik. Aichner headbutts the midsection of Metalik. Aichner brings Metalik to the corner. Aichner slaps Metalik in the chest. Metalik with heavy bodyshots. Metalik ducks a clothesline from Aichner. Metalik goes for a Running Crossbody Block, but Aichner counters with a Pendulum BackBreaker for a two count. Aichner sends Metalik to the corner. Metalik decks Aichner with a back elbow smash. Metalik hits The Reverse SlingBlade. Metalik tags in Dorado. Double Irish Whip. Metalik with a corner clothesline. Metalik kicks Barthel off the ring apron. Dorado with a Spin Kick. Imperium regroups on the outside. Aichner catches Dorado in mid-air. Aichner drives Dorado back first into the ring apron. Aichner bodyslams Dorado on the floor. Barthel attacks Metalik from behind. Barthel gets Metalik tied up in the tree of woe. Imperium with Stereo Corner Dropkicks.

Imperium has complete control of the match during the commercial break. Aichner applies the cobra clutch. Aichner punches Dorado in the back. Aichner talks smack to Dorado. Dorado drops Aichner with The Golden Rewind. Barthel tags himself in. Barthel stops Dorado in his tracks. Barthel applies a rear chin lock. Dorado with heavy bodyshots. Dorado sends Barthel to the corner. Barthel kicks the right hamstring of Dorado. Barthel and Dorado are trading back and forth shots. Barthel with a Step Up Enzuigiri. Dorado with forearm shivers. Dorado slaps Barthel in the chest. Dorado creates distance with The Tornado DDT. Aichner and Metalik are tagged in. Metalik with The SpringBoard Crossbody Block. Metalik kicks the left hamstring of Aichner. Aichner reverses out of the irish whip from Metalik. Metalik with an Apron Enzuigiri. Metalik with The SpringBoard Hurricanrana. Metalik kicks Aichner in the face. Metalik hits The Quebrada for a two count. Aichner denies The Metalik Driver. Satanding Switch Exchange. Metalik goes for an O’Connor Roll, but Aichner holds onto the ropes. Barthel tags himself in. Flying DDT/Cazadora FaceBuster Combination for a two count. Barthel with a straight right hand. Barthel tags in Aichner.

Barthel puts Metalik on the top turnbuckle. Aichner goes for a Vertical Suplex, but Metalik lands back on his feet. Metalik tags in Dorado. Dorado kicks Aichner in the gut. Aichner denies the sunset flip. LHP connects with their Missile Dropkick/Canadian Destroyer Combination for a two count. Dorado kicks Barthel out of the ring. Short-Arm Reversal by Aichner. Aichner sends Dorado to the corner. Dorado decks Barthel with a back elbow smash. Dorado kicks Barthel in the face. Imperium catches LHP in mid-air. Air Raid Crash/BrainBuster Combination for a two count. The referee tells Barthel to get out of the ring. Aichner transitions into a ground and pound attack. Aichner tags in Barthel. Barthel whips Dorado across the ring. Dorado ducks a clothesline from Barthel. SpineBuster/PK Combination. Imperium goes for The European Bomb, but Dorado counters with The FaceBuster. Metalik with a SpringBoard FrankenSteiner into Aichner. Metalik wipes out Aichner with The Asai MoonSault. Barthel uppercuts the back of Dorado’s neck. Barthel rolls Dorado over for a two count. Dorado SuperKicks Barthel. Dorado plants Barthel with The Shooting Star Press to pickup the victory. After the match, Alexander Wolfe appears on the stage and he’s completely disappointed. 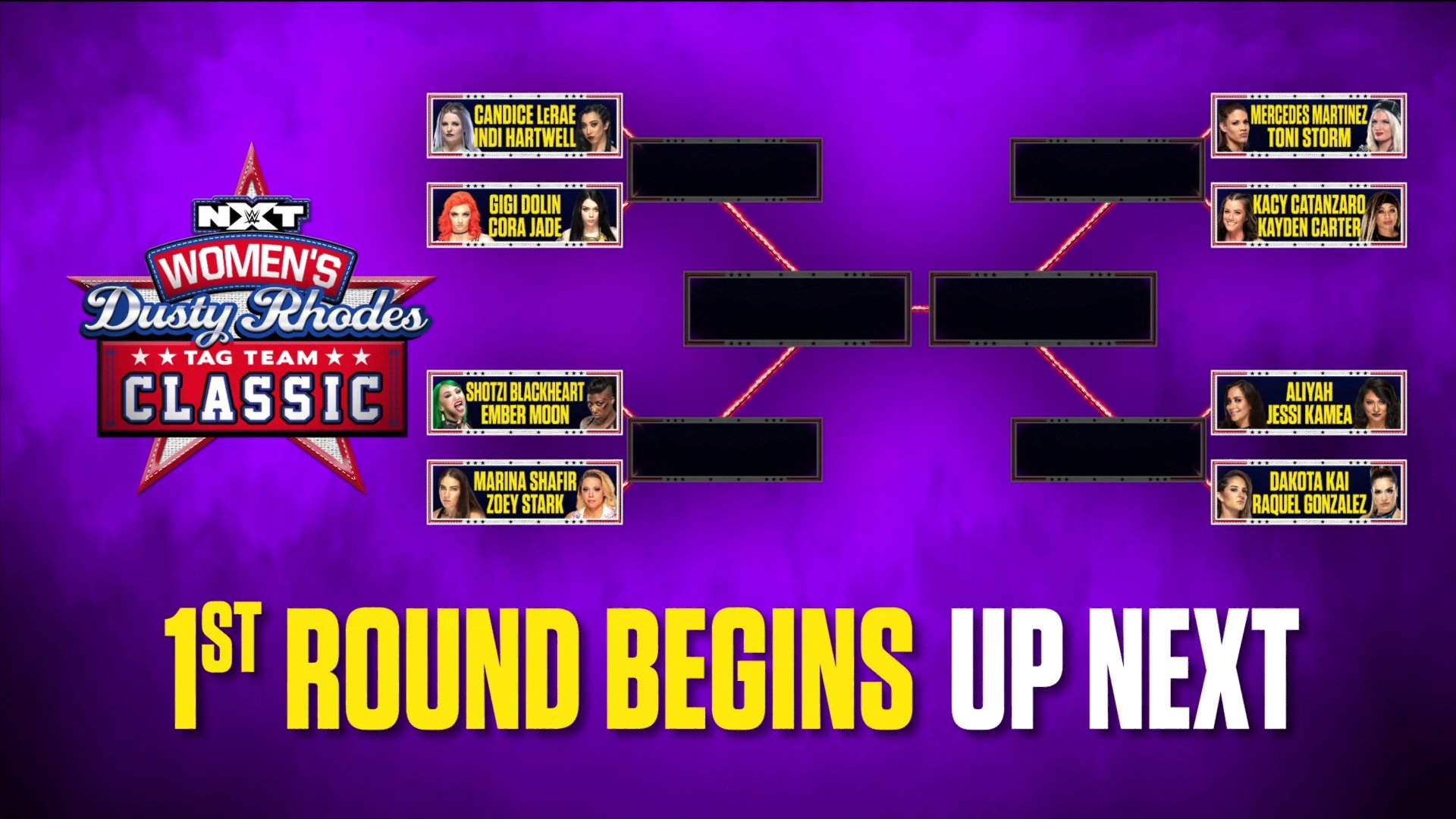 Toni Storm and Kayden Carter will start things off. Collar and Elbow Tie Up. Carter with a waist lock go-behind. Wrist Lock Exchange. Carter drop steps into a side headlock. Storm whips Carter across the ring. Carter runs into Storm. Carter with a double leg takedown. Carter cartwheels over Storm. Storm drops Carter with a shoulder tackle. Carter drops down on the canvas. Storm with a basement dropkick for a two count. Storm tags in Martinez. Martinez with a Side Walk Slam. Two Elbow Drops for a two count. Carter kicks Martinez in the gut. Carter with a Step Up Enzuigiri. Carter ducks a clothesline from Martinez. Martinez goes for a Bodyslam, but Carter lands back on her feet. Carter tags in Catanzaro. Catanzaro drop toe holds Martinez into the middle rope. Pump Kick/SuperKick Combination. Catanzaro with The Slingshot Senton for a two count. Martinez drops Catanzaro with a knife edge chop. Martinez with a straight right hand. Martinez uppercuts Catanzaro.

A well-earned victory dance. @KacyCatanzaro & @wwekayden proved the world wrong, so the only thing left to do is WIN the WHOLE THING! #WWENXT #DustyClassic @mckenzienmitch pic.twitter.com/A2yEGFXysB

Rust rolls around Reed. Rust kicks the left hamstring of Reed. Rust applies a wrist lock. Reed sends Rust to the corner. Reed applies a side headlock. Rust tugs on Reed’s hair. Rust backs Reed into the ropes. The referee calls for a clean break. Rust kicks Reed in the chest. Rust ducks a clothesline from Reed. Rust drops down on the canvas. Reed delivers The Pounce. Rust regroups on the outside. Rust ducks a clothesline from Reed. Reed blocks a boot from Rust. Reed kicks Rust in the gut. Reed with The GutBuster. Reed follows that with The Reverse Fallaway Slam. Bivens tells Rust to outsmart Reed.

NEXT WEEK on #WWENXT on @USA_Network! #DustyClassic

Tap out or get knocked out. It's that simple in the #WWENXT #FightPit!@NXTCiampa #TimothyThatcher pic.twitter.com/h9LF6PjUC8

Checkout Episode 240 of The Hoots Podcast