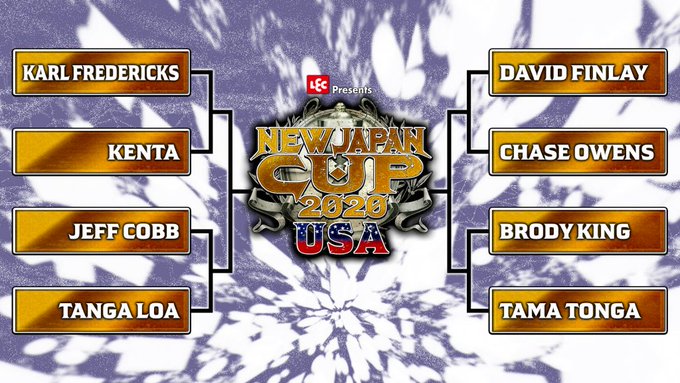 First Match: KENTA vs. Karl Fredericks In A First Round Match In The 2020 New Japan Cup USA

Second Match: Jeff Cobb vs. Tanga Loa In A First Round Match In The 2020 New Japan Cup USA

– There was a cleaning/disinfecting intermission during the broadcast.

Third Match: David Finlay vs. Chase Owens In A First Round Match In The 2020 New Japan Cup USA

Feeling out process after the bell rings. Collar and Elbow Tie Up. Owens with a waist lock takedown. Owens applies a front face lock. Finlay transitions into an arm-bar. Finlay grabs a side headlock. Finlay backs Owens into the ropes. The referee calls for a clean break. Quick shoving contest. Owens applies a side headlock. Finlay drops down on the canvas. Finlay leapfrogs over Owens. Finlay goes for a dropkick, but Owens holds onto the ropes. Finlay dodges The PK. Finlay ducks a clothesline from Owens. Finlay dropkicks Owens for a one count. Finlay with a Snap Vertical Suplex for a one count. Finlay applies an arm-bar. Owens tugs on Finlay’s hair. Owens snaps Finlay’s throat into the top rope. Owens with a closed fist shot to the jaw.

Owens fish hooks Finlay. Owens slams Finlay’s head on the turnbuckle pad. Owens applies a waist lock. Finlay with two sharp elbow strikes. Owens drives his knee into Finlay’s back. Owens with a Pendulum BackBreaker for a two count. Owens with a high elbow smash. Owens slaps Finlay in the back of the head. Owens kicks Finlay in the chest. Owens rakes the eyes of Finlay. Owens whips Finlay into the red turnbuckle pad for a two count. Owens stomps on Finlay’s hand. Owens is choking Finlay with his knee. Owens drives his knee into Finlay’s back. Owens applies The Bow and Arrow Stretch. Owens transitions into a Full Nelson Lock. Finlay backs Owens into the turnbuckle pad. Owens dumps Finlay out of the ring. Owens with a Wrecking Ball Dropkick. Owens rolls Finlay back into the ring. Owens with the cover for a two count. Owens toys around with Finlay.

Fourth Match: Tama Tonga vs. Brody King In A First Round Match In The 2020 New Japan Cup USA

Collar and Elbow Tie Up. King backs Tonga into the ropes. The referee calls for a clean break. King pats Tonga on the chest. Tonga with a forearm smash. Tonga unloads a flurry of bodyshots. King denies the irish whip. Tonga side steps King into the turnbuckle pad. Tonga dropkicks King. Tonga lands The Stinger Splash. Tonga hammers down on the back of King’s neck. King sends Tonga chest first into the canvas. King with a Senton Splash for a two count. King with a forearm smash. King blasts Tonga with a knife edge chop. King with a straight right hand. King slams Tonga’s head on the blue turnbuckle pad. King with forearm shivers. King with a blistering chop. King whips Tonga across the ring. King with a double hand chop for a two count. King applies the sitting abdominal stretch.

King rams his elbow across Tonga’s face. King with clubbing blows to Tonga’s chest. King talks smack to Tonga. King and Tonga are trading back and forth shots. King with the quick cover for a one count. King bodyslams Tonga. King with a Running Splash for a two count. Tonga decks King with a JawBreaker. Tonga dodges The Pump Kick. Tonga drops King with a Leaping NeckBreaker. Tonga with forearm shivers. Tonga is mauling King in the corner. Tonga blocks a boot from King. Tonga kicks out the legs of King. Tonga repeatedly stomps on King’s chest. Tonga rams his boot across King’s face. Tonga with a Running Boot. Tonga goes for The Stinger Splash, but King counters with an Exploder Suplex into the blue turnbuckle pad. King with a corner clothesline. King drives Tonga face first into the red turnbuckle pad. King drops Tonga with a Lariat for a two count. King goes for a PowerBomb, but Tonga blocks it. Tonga connects with Veleno. King negates The GunStun. King with a Release German Suplex. King with an Inside Out Lariat for a two count. Tonga denies The Razor’s Edge. Tonga delivers The Tongan Twist. Tonga plants King with The GunStun to pickup the victory.

Checkout Episode 217 of The Hoots Podcast