Collar and Elbow Tie Up. Priest backs Boa into the turnbuckles. The referee calls for a clean break. Boa ducks a clothesline from Priest. Lockup in the center of the ring. Priest shoves Boa. Boa kicks the left hamstring of Priest. Priest drops Boa with a shoulder tackle. Boa tells Priest to bring it. Priest with two haymakers. Priest repeatedly stomps on Boa’s chest. Boa kicks Priest in the chest. Priest with a Step Up Enzuigiri. Priest follows that with a Leaping Back Elbow Smash. Priest hits The Falcon Arrow. Priest toys around with Boa. Priest grabs the left ear of Boa. Boa unloads a flurry of kicks. Boa with a Running Boot. Priest responds with a Discus Lariat. Priest connects with The Cyclone Kick. Priest plants Boa with The Reckoning to pickup the victory.

.@PeteDunneYxB continues to put the HURT on @AngelGarzaWwe as this match heats up! #WWENXT pic.twitter.com/38CH3zbQC8

Garza is trying to play mind games with Dunne. Dunne with a single leg takedown. Dunne applies the toe and ankle hold. Garza applies a waist lock. Dunne breaks the grip. Dunne works on his joint manipulation game. Dunne bends the right shoulder of Garza for a two count. Garza with a single leg takedown. Chain Grappling Exchange. That leads us to a standoff in the center of the ring. Garza applies a side headlock. Garza slips over Dunne’s back. Garza leapfrogs over Dunne. Both men are running the ropes. Dunne clotheslines Garza. Dunne kicks the left shoulder of Garza. Dunne bends the left elbow of Garza. Garza avoids the foot stomp.

Garza dumps Dunne out of the ring. Garza rips off his pants. Dunne drops Garza with a forearm smash. Dunne goes for a SlingShot Pescado, but Garza ducks out of the way. Garza SuperKicks Dunne. Garza toys around with Dunne. Garza with a hand full of hair. Garza blasts Dunne with a knife edge chop. Garza drives his knee into the ribs of Dunne. Dunne fires up with open hand chops. Garza reverses out of the irish whip from Dunne. Dunne dives over Garza. Dunne with a Step Up Enzuigiri. Dunne follows that with a Release German Suplex. Dunne with a double foot stomp. Dunne with a High Head Kick for a two count. 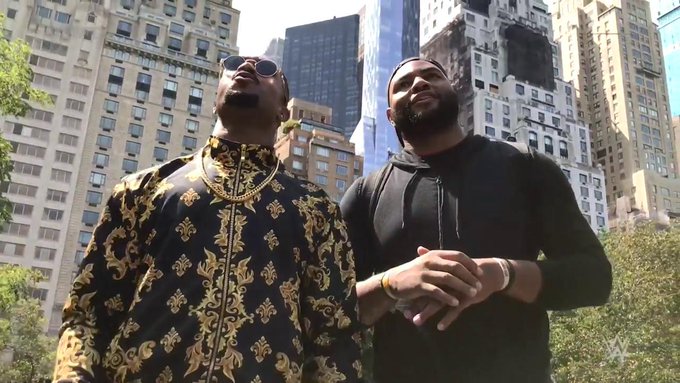 Next week, The Undisputed Era will put their NXT Tag Team Titles on the line against The Street Profits.

.@CGrimesWWE is definitely in his glory as he takes the fight to @RaulMendozaWWE. #WWENXT pic.twitter.com/FtMuFGYEzV

Mendoza applies a wrist lock. Grimes with a leg sweep for a one count. Mendoza with a drop toe hold. Mendoza with a Rolling La Magistral for a two count. Mendoza applies an arm-bar. Grimes drops down on the canvas. Mendoza slides under a boot from Grimes. Mendoza with a Hurricanrana. Mendoza unloads two knife edge chops. Grimes reverses out of the irish whip from Mendoza. Mendoza side steps Grimes into the turnbuckles. Grimes dropkicks Mendoza off the ring apron. Grimes rolls Mendoza back into the ring. Grimes with a running clothesline for a two count. Grimes applies an arm-bar.

This match just goes to show how incredible the Women's division is in #WWENXT! @QoSBaszler @RheaRipley_WWE pic.twitter.com/h6v3BXkQmr

Baszler targets the left shoulder of Ripley. Baszler backs Ripley into the ropes. The referee calls for a clean break. Ripley with a back heel trip. Ripley talks smack to Baszler. Baszler with a waist lock go-behind. Ripley transitions into an arm-bar. Ripley goes for a Bodyslam, but Baszler lands back on her feet. Ripley negates The Kirifuda Clutch. Ripley bodyslams Baszler. Ripley kicks Baszler in the back. Ripley with clubbing forearms to the back of Baszler. Ripley with four shoulder blocks. Ripley goes for a Vertical Suplex, but Baszler counters with an inside cradle for a two count. Ripley dropkicks Baszler. Baszler avoids The Running Boot.

Baszler gets Ripley tied up in the ropes. Baszler with a running boot for a two count. Baszler applies the cravate. Ripley with a Back Body Drop. Baszler side steps The Dropkick from Ripley. Baszler applies a sleeper hold. Ripley with a dropkick that sends Baszler crashing to the floor. Ripley gets Baszler electric chair position. Ripley dumps Baszler face first on the ring apron. Ripley rolls Baszler back into the ring. Ripley drops Shafir with a Big Boot. Ripley is distracted by Duke. Baszler with a Jumping Knee Strike. Baszler grabs the steel chair. Ripley kicks Baszler in the gut. Ripley hits Baszler with the chair which causes the disqualification. After the match, Ripley tells Baszler to bring it. The Horsewomen head to the backstage area.

Check Out Episode 172 of The Hoots Podcast