Everybody wants to know why. Where has Sasha Banks been? For four months, Sasha was gone. Out of sight, minding her own business. Not talking to anyone. People can’t keep her name out of their mouths. Sasha Banks threw a fit, yes she did. Sasha was seen crying in the locker room at WrestleMania, yes she did. Sasha took her ball and went home, yes she did. She was relegated to being in a tag match that she didn’t care about. She couldn’t care less about the WWE Women’s Tag Team Championships. Meanwhile, Becky Lynch got to wrestle in the main event against Ronda Rousey.

Sasha went on some vacations using her WrestleMania pay check. She came back and she had a plan. It had to be a perfect moment and there she was, Natalya. Her poor innocent one armed friend. She gave Natalya a hug and lied straight to her face. Look who comes to save the day? Becky Lynch, right on cue.  You saw what happened to her. Now Sasha Banks is the center of attention, as she properly deserves. You wanna know why? She’s the standard of the women’s division. She’s The BO$$. Now she deserves all this glory. Sasha gets in a pull apart brawl with Natalya to close the segment.

First Match: Drew McIntyre vs. Ricochet in a First Round Match In The 2019 WWE King Of The Ring Tournament 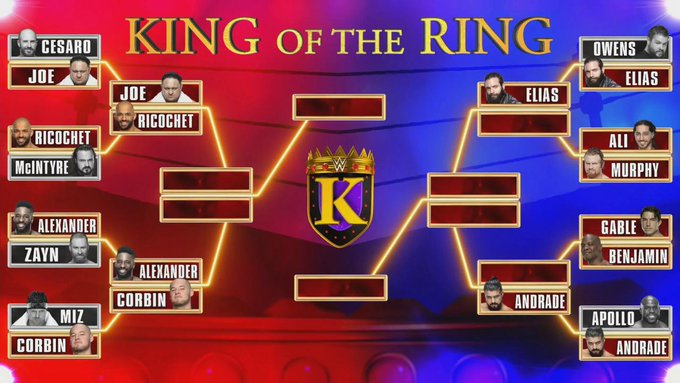 Second Match: The Miz vs. Baron Corbin in a First Round Match In The 2019 WWE King Of The Ring Tournament

.@BaronCorbinWWE knows how much you'll hate it if he wins the #KingOfTheRing Tournament, and that makes him want to win it even more. 😏 #RAW @mikethemiz pic.twitter.com/xIF9BGu01q

Corbin rocks Miz with a forearm smash. Corbin repeatedly stomps on Miz’s chest. Corbin gives himself a standing ovation. Miz kicks Corbin in the gut. Miz is throwing haymakers at Corbin. Miz transitions into a Corner Mount. Miz kicks Corbin in the chest. Miz with a Big Boot. Miz clotheslines Corbin over the top rope. Miz plays to the crowd. Corbin avoids The Wrecking Ball Dropkick. Corbin floors Miz with a heavy right hand. Corbin slams Miz’s head on the ring apron. Corbin repeatedly drives Miz back first into the ringside barricade. Corbin rolls Miz back into the ring. Miz is trying to build momentum. Corbin reverses out of the irish whip from Miz. Corbin hits The Wrap Around Lariat.

Miz ducks a clothesline from Corbin. Miz delivers his Back/NeckBreaker Combination. Miz tees off on Corbin. Rapid Fire IT! Kicks. Miz with Two Corner Meteora’s. Miz lands The Awesome Clothesline. Miz follows that with a Flying Double Axe Handle Strike for a two count. Miz drives his knee into the left hamstring of Corbin. Corbin negates The Figure Four Leg Lock. Corbin drills Miz with The Deep Six for a two count. Corbin argues with the referee. Miz kicks Corbin in the face. Corbin denies The Skull Crushing Finale. Corbin goes for a Belly to Back Suplex, but Miz lands back on his feet.

.@NikkiCrossWWE has her friend and tag team partner @AlexaBliss_WWE in mind as she TAKES IT to #SDLive #WomensChampion @itsBayleyWWE! #RAW pic.twitter.com/3obxZJMtoE

Cross shoves Bayley. Bayley answers with a forearm smash. Cross kicks Bayley in the gut. Bayley with a single leg takedown. Bayley applies a side headlock. Bayley drops down on the canvas. Bayley hits The Saito Suplex. Bayley goes for The Wrecking Ball Dropkick, but Cross blocks it. Cross dumps Bayley face first on the ring apron. Cross drives Bayley chest first into the LED Board. Cross rolls Bayley back into the ring. Cross hammers down on the left wrist of Bayley. Cross applies a bodyscissors hold. Cross talks smack to Bayley. Cross rolls Bayley over for a two count. Cross with two knee lifts for a two count. Cross punches Bayley in the back.

There will be NO ONE to stop @AJStylesOrg from getting those hands tonight… #RAW @BraunStrowman pic.twitter.com/C5BRXcVNtl

Fourth Match: The Viking Raiders vs. The B-Team vs. The OC vs. Robert Roode & Dolph Ziggler vs. The Lucha House Party vs Curt Hawkins & Zack Ryder vs. The Revival vs. Heavy Machinery in a Tag Team Turmoil Match. The Winners Will Battle Seth Rollins & Braun Strowman For The WWE Raw Tag Team Championships At WWE Clash Of Champions

The Viking Raiders vs. The B-Team

Erik and Curtis Axel will start things off. Erik with a double leg takedown. Axel scores the elbow knockdown. Axel repeatedly stomps on Erik’s chest. Axel tags in Dallas. The B-Team are double teaming Erik. Dallas with a corner clothesline. Axel goes for a DDT, but Erik counters with a forearm smash. Erik drives his knee into the midsection of Dallas. Erik drives Dallas back first into the turnbuckles. Erik tags in Ivar. Erik nails Dallas with a knee lift. Erik knocks Axel off the ring apron. The Viking Raiders plants Dallas with The Viking Experience to pickup the victory. The B-Team has been eliminated.

Winner: The Viking Raiders via Pinfall

The Viking Raiders vs. The OC (Karl Anderson & Luke Gallows)

Gallows blasts Erik off the ring apron. Ivar attacks Gallows from behind. The OC are double teaming Ivar. The OC drops Ivar with a double shoulder tackle. Gallows with rapid fire bodyshots. Anderson delivers The Hi-Yah Kick. Gallows levels Ivar with a Body Avalanche. The OC beats down Erik on the outside. Ivar lands The Suicide Dive. A pier six brawl gets both teams disqualified. The Viking Raiders and The OC has been eliminated.

The match started during the commercial break. Roode is in the ring with Dorado. Dorado with shots to the midsection of Roode. Dorado decks Roode with a JawBreaker. Dorado slaps Roode in the chest. Roode whips Dorado across the ring. Dorado kicks Roode in the face. Dorado is trying to create separation. Dorado with a Tilt-A-Whirl HeadScissors TakeOver. Roode tags in Ziggler. Ziggler stops Dorado in his tracks. Dorado with a Step Up Enzuigiri. Dorado tags in Metalik.

Ziggler and Scott Dawson will start things off. Collar and Elbow Tie Up. Dawson backs Ziggler into the turnbuckles. Dawson with a side headlock takeover. Ziggler answers with the headscissors escape. Chain grappling exchange. Dawson scrambles to the middle rope to create separation. Dawson decks Ziggler with a back elbow smash. Back to the collar and elbow tie up. Ziggler applies a side headlock. Ziggler tags in Roode. Knife Edge Chop Exchange. Roode reverses out of the irish whip from Dawson. Roode with a Back Body Drop. Roode applies a front face lock. Roode tags in Ziggler. Ziggler applies a side headlock. Wilder tags himself in. Wilder drops Ziggler with a slingshot shoulder tackle. Wilder knocks Roode off the ring apron.

Dawson kicks Ziggler in the gut. Dawson goes for a Belly to Back Suplex, but Ziggler lands back on his feet. Ziggler decks Dawson with a back elbow smash. Ziggler tags in Roode. Wilder side steps The SuperKick. Wilder goes for Tornado DDT off Roode’s chest, but Ziggler counters with an OverHead Toss. Ziggler connects with The Famouser. Ziggler goes for The Leaping DDT, but Wilder blocks it. Dawson drills Ziggler with The SpineBuster. Dawson kicks Roode in the gut. Dawson goes for another Brain Buster, but Roode lands back on his feet. Roode plants Dawson with The Glorious DDT to pickup the victory. The Revival has been eliminated.

Roode rams his boot across Knight’s face. Roode with a double knee drop for a two count. Roode tags in Ziggler. Ziggler punches Knight in the ribs. Ziggler drops Knight with a NeckBreaker for a two count. Ziggler applies a sleeper hold. Ziggler pulls Knight down to the mat. Knight catapults Ziggler into the steel ring post. Roode and Dozovic are tagged in. Dozovic with two shoulder tackles. Dozovic levels Ziggler with a Body Avalanche. Dozovic follows that with a Spinning BodySlam.

Dozovic deliver another Body Avalanche. Dozovic dumps Ziggler face first into the canvas. Dozovic with a Double Body Avalanche. Dozovic hits The Caterpillar. Roode rolls Dozovic over for a two count. Dozovic connects with The Pop Up World Strongest Slam for a two count. Dozovic tags in Knight. Ziggler SuperKicks Knight. Heavy Machinery goes for The Compactor, but Roode and Ziggler counters with their Crossbody Block/Zig Zag Combination. Roode plants Knight with The Glorious DDT to pickup the victory.

#TheBoss @SashaBanksWWE is BACK in the squared circle and she's more vicious than ever! #RAW @NatByNature pic.twitter.com/AN5CVyEHrG

Sasha launches Natalya to the time keepers area. Sasha with the cover for a two count. Sasha talks smack to Natalya. Natalya slaps Sasha in the face. Sasha repeatedly stomps on Natalya’s chest. Sasha attacks the injured left shoulder of Natalya. Sasha goes for a Leaping Meteora, but Natalya ducks out of the way. Natalya rolls Sasha over for a two count. Sasha negates The SharpShooter. Sasha connects with The BackStabber. Sasha makes Natalya tap out to The Bank Statement. After the match, Sasha locks in another Bank Statement.

"When I beat @BraunStrowman tonight, I'm going to give him what he deserves: NOTHING." – #USChampion @AJStylesOrg #RAW pic.twitter.com/KpksvXFZX3

When you got it, you got it.
When you're hot, you're hot, and @RealRobertRoode & @HEELZIGGLER are HOT… and GLORIOUS!#RAW pic.twitter.com/dSEeJDCGoz

– The Finals Of The 2019 WWE King Of The Ring Tournament

THE OFFICIAL IS DOWN! There's no telling where this #USTitle match between @AJStylesOrg & @BraunStrowman will go… #RAW pic.twitter.com/vjuOVQAvEk

Strowman HeadButts Styles for a two count. Strowman with two shoulder tackles. Strowman goes for The Running PowerSlam, but Styles lands back on his feet. Styles sends Strowman shoulder first into the steel ring post. Styles dropkicks Strowman into the referee. Styles with rapid fire haymakers. Styles rakes the eyes of Strowman. Styles lands the low blow. Styles delivers two chair shots. Strowman PowerSlams Styles. The referee is still laid out. The OC attacks Strowman from behind. Strowman kicks Anderson in the gut. Strowman decks Gallows with a back elbow smash. Strowman delivers multiple chair shots. Styles is channeling his inner Eddie Guerrero which gets Strowman disqualified. After the match, Styles laughs. Strowman destroys The OC to close the show.

Check Out Episode 169 of The Hoots Podcast