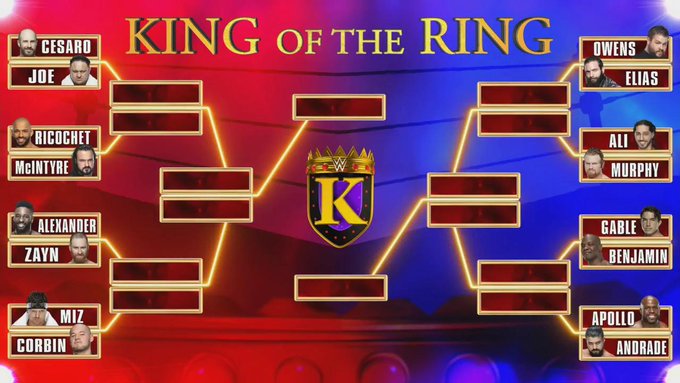 Ziggler wants to tell Roman Reigns face to face that he’s not a keyboard warrior like all wrestling fans. Ziggler is trying to be the bigger man. He doesn’t know why Roman gets all of the attention. Roman almost got hit by a lighting rig and a car. Do you know what it’s like to be speared by Goldberg?

Ziggler was speared three times. It’s bad enough to get speared by Goldberg and he didn’t see it coming. Ziggler thought he had to wait 6 months between spears. Then Shawn Michaels super kicked him. Last week, Ziggler was so out of it that Maryse’s husband beat him with Ric Flair’s move. Do you know how embarrassing that is? Everyone here knows that it should’ve been Dolph Ziggler.

Ziggler SuperKicks Reigns before the bell rings. Reigns slowly gets back on his feet. Reigns drops Ziggler with a big haymaker. Ziggler heads to the outside. Reigns goes for The Flying SuperMan Punch off the steel ring steps, but Ziggler ducks out of the way. Ziggler sends Reigns chest first into the ringside barricade. Ziggler hits The Zig Zag on the floor. Ziggler applies a rear chin lock. Reigns gets back to a vertical base. Ziggler kicks Reigns in the gut. Ziggler with a straight right hand. Reigns launches Ziggler over the top rope. Reigns delivers The Drive By.

McIntyre launches Ricochet across the ring. McIntyre goes for The ClayMore, but Ricochet counters with a SuperKick. Miz delivers The Skull Crushing Finale. Corbin ChokeSlams Miz. Ricochet side steps Corbin into the turnbuckles. Ricochet with a shoulder block. Corbin catches Ricochet in mid-air. Corbin goes for a ChokeSlam, but Ricochet lands back on his feet. Corbin hits Deep Six for a two count. Corbin is displaying his frustration. Corbin puts Ricochet on the top turnbuckle. Ricochet is throwing haymakers at Corbin. Ricochet with a Missile Dropkick. Miz pulls Ricochet out of harms way. Ricochet plants Corbin with The Recoil to pickup the victory.

Winner: Ricochet & The Miz via Pinfall

Styles slaps Strowman in the face. Strowman launches Styles to the corner. Styles side steps Strowman into the turnbuckles. Strowman drops Styles with a shoulder tackle. Styles is gathering himself on the outside. Strowman chases Styles around the ringside area. Styles with rapid fire haymakers. Strowman goes for The ChokeSlam, but Styles lands back on his feet. Styles repeatedly kicks the left hamstring of Strowman. Strowman with a Back Body Drop. Strowman knocks The OC off the ring apron. Styles kicks Strowman in the jaw.

Styles with a forearm smash. Styles goes for The Phenomenal Forearm, but Strowman counters with an Open Hand Chop. Strowman gets Styles in position for The Running PowerSlam. Luke Gallows SuperKicks Strowman which causes the disqualification. After the match, Anderson dropkicks the left knee of Strowman. Gallows drops Strowman with a Running Boot. The OC drives Strowman shoulder first into the steel ring post. Gallows with a High Head Kick. Seth Rollins storms into the ring. Rollins clotheslines Anderson. Rollins is throwing haymakers at Gallows. Rollins with Two SuperKicks. Rollins clotheslines Gallows over the top rope.

Fourth Match: Samoa Joe vs. Cesaro in a First Round Match In The 2019 WWE King Of The Ring Tournament

.@SamoaJoe is IN CONTROL as he sends @WWECesaro flying into the @WWEUniverse in this #KingOfTheRing Tournament matchup on #RAW! pic.twitter.com/dL3sIvbL9z

Cesaro starts things off with a Running European Uppercut for a two count. Cesaro goes for a Vertical Suplex, but Joe blocks it. Joe unloads three knife edge chops. Cesaro drives his knee into the midsection of Joe. Cesaro with a straight right hand. Joe scores the elbow knockdown. Cesaro ducks a clothesline from Joe. Cesaro with a SpringBoard Spinning Uppercut for a one count. Joe negates The Swing. Joe with a heavy chop. Joe whips Cesaro to the corner. Joe with a running elbow smash. Joe follows that with a Step Up Enzuigiri. Joe lands The Suicide Dive.

Joe with rapid fire right jabs. Knife Edge Chop Exchange. Joe clotheslines Cesaro. Joe applies the cravate. Joe uppercuts Cesaro. Joe argues with the referee. Joe goes for a Running Senton, but Cesaro ducks out of the way. Uppercut Party in the corner. Cesaro drops Joe with The Big Boot for a two count. Cesaro follows that with a Vertical Suplex for a two count. Joe with a chop/forearm combination. Cesaro responds with a Running European Uppercut on the floor.

Cesaro rolls Joe back into the ring. Cesaro with a Flying Crossbody Block for a two count. Joe hits The Uranage Slam. Joe with a Running Senton for a two count. Cesaro with two uppercuts. Cesaro with a double leg takedown. Cesaro delivers The Cesaro Swing. Cesaro locks in The SharpShooter. Cesaro transitions into The CrossFace. Joe negates The Neutralizer. Joe goes for a Back Body Drop, but Cesaro lands back on his feet. Cesaro goes for a SpringBoard European Uppercut, but Joe counters with The Coquina Clutch. Cesaro eventually taps out.

Fifth Match: The New Day vs. The Revival

Big E prepares for The Midnight Hour. Dawson sends Woods crashing to the outside. Big E knocks Dawson off the ring apron. Big E with a straight right hand. Randy Orton drills Big E with The RKO which causes the disqualification. After the match, The Revival and Orton beats down Big E. Kofi Kingston storms into the ring to make the save. Kofi with a Leaping Clothesline. Kofi ducks a clothesline from Wilder. Kofi thrust kicks the midsection of Wilder. Kofi with a Flying Double Axe Handle Strike. Orton responds with The RKO. Woods tees off on Orton. Orton and The Revival hits their RKO/3D Combination.

Winner: The New Day via Disqualification

Cross and Devillle will start things off. Deville with a waist lock takedown. Deville applies a front face lock. Cross tags in Bliss. Deville with a bodyscissors rollup for a one count. Deville with The La Magistral for a one count. Deville drives her knee into the midsection of Bliss. Deville tags in Rose. Fire and Desire are double teaming Bliss. Rose with a straight right hand. Rose goes for a Bodyslam, but Bliss lands back on her feet. Bliss applies a waist lock. Rose decks Bliss with a back elbow smash. Rose cartwheels around Bliss. Rose taunts Bliss. Rose dropkicks Bliss. Rose with a Running Knee Strike for a two count. Bliss backs Rose into the ropes. The referee calls for a clean break. Cross punches Rose in the back. Rose with a forearm smash on the floor. Bliss responds with a Wrecking Ball Dropkick. Bliss kicks Rose in the back.

Bliss rolls Rose back into the ring. Bliss with the cover for a two count. Bliss whips Rose to the corner. Bliss tags in Cross. Cross with a Body Avalanche. Bliss follows that with a Fake Out Slap. Cross with a snap mare takedown. Cross applies a straight jacket hold. Cross pulls Rose down to the mat. Cross tags in Bliss. Rose nails Bliss with The Pump Knee Strike. Deville and Cross are tagged in. Deville with two haymakers. Deville unloads a flurry of kicks. Deville with a Sliding Knee Strike. Deville is distracted by Bliss. Cross kicks Deville in the face. Cross drives Rose shoulder first into the steel ring post. Deville hits The SpineBuster. Deville kicks the left shoulder of Bliss. Cross kicks Deville in the gut. Cross plants Deville with The Swinging NeckBreaker to pickup the victory.

Seventh Match: Cedric Alexander vs. Sami Zayn in a First Round Match In The 2019 King Of The Ring Tournament

.@CedricAlexander is pulling out all the stops against @SamiZayn as he looks to advance in the #KingOfTheRing Tournament! #RAW pic.twitter.com/SR1INxHID7 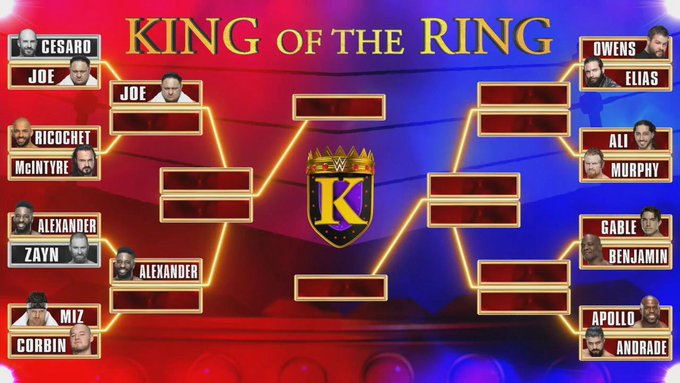 Gallows and Strowman will start things off. Gallows talks smack to Strowman. Strowman shoves Gallows. Collar and Elbow Tie Up. Strowman backs Gallows into the turnbuckles. Strowman with rapid fire bodyshots. Strowman drops Gallows with a shoulder tackle. Strowman flexes his muscles. Strowman tags in Rollins. Rollins with a Flying Double Axe Handle Strike. Rollins applies a wrist lock. Gallows with a straight right hand. Gallows slams Rollins head on the top turnbuckle pad. Gallows tags in Anderson. Anderson is throwing haymakers at Rollins. Rollins fire back with a chop/haymaker combination. Anderson reverses out of the irish whip from Rollins. Rollins kicks Anderson in the chest. Rollins clotheslines Anderson. Rollins goes for a Vertical Suplex, but Anderson lands back on his feet. Standing Switch Exchange. Anderson tags in Gallows.

Rollins knocks Gallows off the ring apron. Rollins with a single leg dropkick. Rollins follows that with a Flying Knee Strike off the ring apron. Rollins is distracted by Styles. Gallows uppercuts Rollins. Gallows repeatedly dumps Rollins ribs first on the ringside barricade. The OC are cutting the ring in half. Anderson applies an arm-bar. Rollins needs to create separation. Anderson hits The SpineBuster for a two count. Anderson puts Rollins on the top turnbuckle. Anderson with two haymakers. Anderson goes for a SuperPlex, but Rollins blocks it. Rollins HeadButts Anderson. Rollins kicks Anderson in the face. Rollins nails Alexander with The BlockBuster. Anderson tags in Gallows. Gallows stops Rollins in his tracks. Gallows uses the middle rope as a weapon. Styles gets under Strowman’s skin. Gallows shoves Strowman into the steel ring post.

Rollins SuperKicks Gallows. Gallows tags in Anderson. Rollins hits The SlingBlade. Rollins with three running forearm smashes. Gallows goes for a Bodyslam, but Rollins lands back on his feet. Rollins sends Gallows tumbling to the floor. Rollins lands The Suicide Dive. Rollins with The Falcon Arrow for a two count. Anderson launches Rollins to the ring apron. Styles shoves Rollins off the top turnbuckles. Anderson tags in Gallows. The OC delivers their Belly to Back Suplex/NeckBreaker Combination for a two count. Frequent tags from The OC. Rollins negates The Magic Killer. The OC double teams Rollins. Anderson dumps Rollins out of the ring. Shoulder Block Party. Anderson goes for a Belly to Back Suplex, but Rollins lands back on his feet. Rollins ducks a clothesline from Anderson. Rollins tags in Strowman. Strowman with two shoulder tackles. Strowman levels Anderson with a Body Avalanche. Strowman runs through Gallows. Rollins connects with The Curb Stomp. Stromwan plants Anderson with The Running PowerSlam to pickup the victory.

Check Out Episode 168 of The Hoots Podcast