Drake immediately heads to the outside after the bell rings. Triple test of strength. Andrews applies a side headlock. Carrillo reverses the hold. Carrillo ducks a clothesline from Gallagher. Carrillo shows off his athleticism. Andrews dropkicks Gallagher. Carrillo dropkicks Andrews. Gallagher uppercuts Carrillo. Drake rolls Gallagher over for a two count. Drake the ultimate spot picker. Andrews is lighting up Drake’s chest. Andrews slides under a clothesline from Drake. Andrews with a Step Up Enzuigiri. Carrillo with a Lucha Libre Arm-Drag TakeOver. Carrillo follows that with a SpringBoard Crossbody Block. Andrews creates distance with a shoulder block. Drake pulls Andrews off the ring apron. Drake dumps Andrews face first on the ring apron.

Drake repeatedly stomps on Carrillo’s chest. Drake with a forearm smash to Gallagher. Carrillo kicks Drake in the gut. Drake slides under Carrillo. Drake drops Carrillo with a Spinning Heel Kick for a two count. Drake prevents Andrews from entering the ring. The London crowd is getting under Drake’s skin. Drake is throwing forearms at Carrillo. Drake is choking Carrillo with his boot. Drake has complete control of the match. Drake with a Snap Vertical Suplex for a two count. Drake applies a rear chin lock. Carrillo gets back to a vertical base. Drake with a knee smash. Gallagher and Drake are trading back and forth shots.

Gallagher with a Delayed Vertical Suplex. Drake has Gallagher perched on the top turnbuckle. Drake attacks the back of Gallagher’s neck. Carrillo drills Drake with an Apron Enzuigiri. Andrews with an Avalanche Reverse FrankenSteiner. Gallagher responds with a Flying Reverse HeadButt. Carrillo with Twisting Splash for a two count. Forearm/Palm Strike/Open Hand Chop Exchange. Carrillo SuperKicks Gallagher. Carrillo kicks Andrews in the gut. Andrews hits The StunDog Millionaire. Andrews with a Double Pele Kick. Gallagher HeadButts Andrews. From behind, Carrillo rolls Gallagher over to pickup the victory.

"Good luck in our match, and try to come back in one piece."@AriyaDaivariWWE wasn't about to travel to 🇬🇧 just 5 days before the biggest match of his career against @TonyNese at #MITB… #205Live pic.twitter.com/hJj9BAosGH

#Cruiserweight Champion @TonyNese is learning EXACTLY what makes #NXTUK Superstar @Ligero1 the VETERAN athlete that he is! #205Live pic.twitter.com/TK9zw9zTzD

Nese with a waist lock go-behind. Ligero transitions into a wrist lock. Nese reverses the hold. Nese with an arm-drag takeover. Nese applies an arm-bar. Nese transitions into a hammerlock. Nese backs Ligero into the turnbuckles. The referee calls for a clean break. Ligero crawls under Nese. Ligero leapfrogs over Nese. Nese scouted the monkey flip. Rollup Exchange. That leads us to a standoff in the center of the ring. Nice display of sportsmanship. Nese shakes the hand of the referee. Collar and Elbow Tie Up. Nese applies a side headlock. Nese drops Ligero with a shoulder tackle. Nese rolls Ligero over for a two count. Ligero goes for a Hip Toss, but Nese counters with a cradle cover for a two count. Ligero lunges over Nese. Ligero with a single leg takedown. Ligero follows that with a Hurricanrana for a two count. 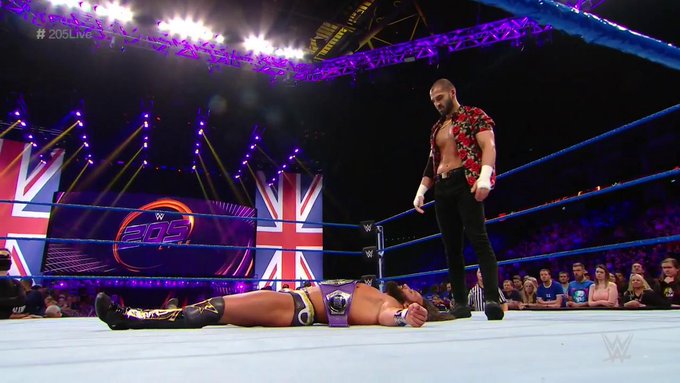