Who will meet @CedricAlexander in the FINALS of this #1Contender's tournament on #205Live? pic.twitter.com/VuJYv4SAEV

First Match: Cedric Alexander vs. Oney Lorcan in a Semi-Final Round Match In The WrestleMania Number One Contender’s Tournament

.@CedricAlexander is pouring his entire soul into this match as he looks to advance in this #Cruiserweight Tournament! #205Live @_STARDESTROYER pic.twitter.com/WnnEZfSCzS

.@RealMikeBennett is FINALLY getting his opportunity to shine next week, but it sounds like there are MAJOR implications attached… #205Live @WWEMaverick @MariaLKanellis pic.twitter.com/CCQJY6TCAx

Second Match: Drew Gulak vs. Tony Nese in a Semi-Final Round Match In The WrestleMania Number One Contender’s Tournament

.@TonyNese is pulling out ALL the stops as he collides with @DrewGulak for a chance to advance in the #205Live #Cruiserweight tournament! pic.twitter.com/6OKAhvQhoI

Collar and Elbow Tie Up. Gulak applies a side headlock. Gulak transitions into a wrist lock. Gulak whips Nese to the corner. Gulak dives over Nese. Gulak with a deep arm-drag takeover. Nese applies an arm-bar. Nese decks Gulka with a back elbow smash. Nese goes for a MoonSault, but Gulak ducks out of the way. Nese escapes The GuLock. Nese wisely heads to the outside. Nese gets back in the ring at the count of four. Test Of Strength. Nese kicks Gulak in the gut. Nese applies a wrist lock. Gulak responds with a headscissors neck lock. Nese floats over into the side headlock. Nese is trying to pin Gulak’s shoulders to the mat. Nese dropkicks Gulak to the floor. Nese cartwheels off the ring apron. Nese SuperKicks Gulak. Nese unloads a knife edge chop. Nese rolls Gulak back into the ring.

Nese with the cover for a one count. Nese with a Vertical Suplex for a one count. Nese blasts Gulak with a knife edge chop. Gulak punches Nese in the gut. Gulak gets Nese in position for a PowerBomb. Gulak dumps Nese face first on the top rope. Gulak repeatedly stomps on Nese chest. Nese is throwing forearms at Gulak. Nese goes for a Vertical Suplex, but Gulak lands back on his feet. Gulak with a Reverse Vertical Suplex. Gulak kicks the left hamstring of Nese. Gulak starts bending the left knee of Nese. Gulak with a hand full of hair. Gulak punches Nese in the back. Gulak slams the injured knee of Nese on the canvas for a two count. Gulak applies a rear chin lock. Nese with a Belly to Back Suplex. Gulak responds with a slingshot foot stomp. Gulak is mauling Nese in the corner.

Gulak launches Nese to the ring apron. Nese with a High Head Kick. Nese hits The SpringBoard Split Legged MoonSault for a two count. Nese with a forearm smash. Gulak dropkicks Nese. Gulak goes for The GuLock, but Nese blocks it. Nese kicks out of Two PowerBombs. Nese puts Gulak on the top turnbuckle. Nese with a Roll Through Palm Strike. Nese follows that with The FrankenSteiner. Nese goes for a 450 Splash, but Gulak ducks out of the way. Nese goes for a PumpHandle Driver, but Gulak blocks it. Standing Switch Exchange. Gulak rolls Nese over for a two count. Gulak applies The GuLock. Nese rolls to the bottom rope to create separation. Nese slaps Gulak in the face. Nese with a Turnbuckle German Suplex. Gulak avoids The Running Nese. Gulak with an Inside Out Lariat for a two count. Gulak gets Nese trapped in The GuLock. Nese rolls Gulak over to pickup the victory. 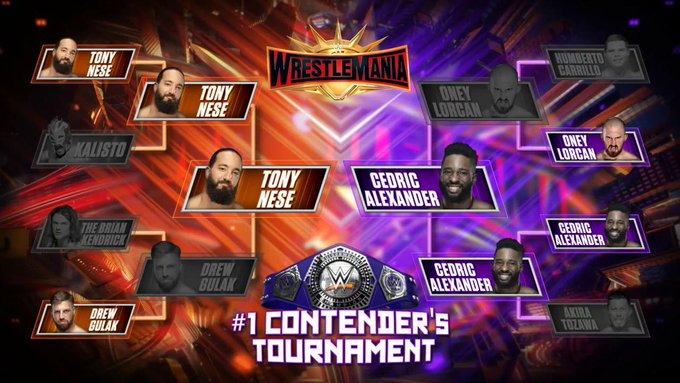