For all of our WWE NXT Transcriptions click here

Shirai and Shafir will start things off. Collar and Elbow Tie Up. Shafir with an early STO. Shafir goes for a Judo Throw, but Shirai lands back on her feet. Shirai ducks a clothesline from Shafir. Shirai dropkicks Shafir. Shirai tags in Sane. Duke signals for the test of strength. Duke is towering over Sane. Sane slaps Duke in the chest. Duke with a double leg takedown. Sane transitions into a ground and pound attack. Duke repeatedly slams Sane’s head on the canvas. Sane rolls Duke over for a two count. Sane applies a front face lock. Sane tags in Shirai.

Duke goes back to the butterfly stretch. Duke shoves Shirai into the turnbuckles. Duke tags in Shafir. Shafir with a Modified Dragon Sleeper. Shirai creates distance with a Tornado Reverse DDT. Shafir goes for a Belly to Back Suplex, but Shirai lands back on her feet. Shirai ducks a clothesline from Shafir. Shirai tags in Sane. Sane dropkicks Shafir. Sane with a Dragon Screw Leg Whip. Sane follows that with Two BlockBusters. Shafir reverses out of the irish whip from Sane. Sane Spears Shafir. Sane hits The Sliding D. Shirai kicks Duke off the ring apron. Sane with a Pop Up Elbow Drop. Shirai lands a Suicide Dive. Sane connects with The Insane Elbow to pickup the victory.

Angelo Dawkins and Steve Cutler will start things off. Cutler shoves Dawkins. Dawkins tackles Cutler. Dawkins transitions into a ground and pound attack. Cutler tags in Blake. Blake applies a full nelson lock. Ford attacks Cutler from behind. Ford is throwing haymakers at Cutler. Ford sends Blake crashing into Cutler. Dawkins rolls Blake back into the ring. Dawkins tags in Ford. Double Shoulder Block. Street Profits follows that with a Double FlapJack. Dawkins clotheslines Cutler over the top rope. Blake clotheslines Ford. Blake is putting the boots to Ford. Blake tags in Cutler. The Forgotten Sons are cutting the ring in half.

Cutler with a BackBreaker. Cutler talks smack to Ford. Cutler slaps Ford in the face. Cutler with a High Angle Suplex. Cutler tags in Blake. Forgotten Sons with a Double Uranage BackBreaker for a two count. Blake with a SlingShot Knee Drop. Blake applies a rear chin lock. Ford gets back to a vertical base. Ford decks Cutler with a back elbow smash. Blake BuckleBombs Ford. Cutler with a SlingShot BackBreaker for a two count. The referee is trying to get Dawkins out of the ring. Ford sends Blake crashing to the outside. Blake goes for a Flying Splash, but Ford ducks out of the way. Blake with a hand full of tights. Ford tags in Dawkins.

Dawkins with rapid fire haymakers. Dawkins is mauling Blake in the corner. Dawkins dropkicks Cutler. Dawkins follows with a Back Body Drop. Dawkins dumps Blake face first on the top rope. Dawkins with a Running Bulldog. Dawkins is fired up. Dawkins goes for a 360 Splash, but Blake ducks out of the way. Ford lands a SomerSault Plancha. Dawkins Spears Blake for a two count. Street Profits connects with their SomerSault NeckBreaker/Electric Chair Suplex Combination for a two count. Dawkins dumps Cutler out of the ring. Dawkins tags in Ford. Dawkins and Cutler are trading back and forth shots. Ryker clotheslines Ford on the floor. Dawkins is pissed. Blake lands a Suicide Dive. Blake tags in Cutler. The Forgotten Sons plants Dawkins with The Memory Remains to pickup the victory.

Winner: The Forgotten Sons via Pinfall 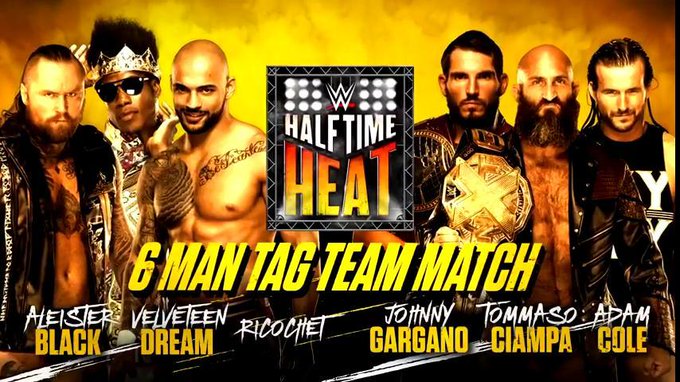 Use Up/Down Arrow keys to increase or decrease volume.