Click here for all my WWE SmackDown Live Transcriptions.

In two short weeks, Becky Lynch gets the opportunity to take back her title. This is the same title she got the whole world talking about. Where is it now? The whole roster things that what she is doing is a fluke.They think getting the world to listen, connecting with the fans, main eventing, and being the man is easy, but they see how hard it is. Everyone is trying to be a badass since she broke through. Asuka is finding out how hard it is to lead this division.

There are those who tried to discredit her and say that she is hype. She delivers on everything she says every single time. If you really want to talk about hype, Asuka walked into last year’s WrestleMania indestructible and undefeated, but not only did she lose. Asuka fell off the radar after that lost. The invincible Asuka was not able to beat the woman that Becky has defeated all over the world for five months and Asuka is asking if Becky is ready.

Asuka comes out to interrupt Becky. Becky is a bee without sting. After the Royal Rumble Becky will not be in Charlotte’s shadow. However, she will be in Asuka’s shadow. The Iconics appears on the stage. That is not how a proper champion should behave by making scary faces and threats. Where is the dignity and class? Did you see Becky bully Kayla Braxton around? Typical behavior of a man. It doesn’t matter who wins at Royal Rumble because they are going to win the Royal Rumble match and they will be the first ever WWE Women’s Tag Team Championships. They will also make WrestleMania, ICONIC. Becky will show everyone why she is the talk of the industry.

Anything #TheMan can do, THE CHAMP can do better?!

That seems to be the message from #SDLive #WomensChampion @WWEAsuka! pic.twitter.com/i9ROGLDTWH

Becky punches Royce in the throat. Becky rolls Royce back into the ring. Becky with a Spinning Back Kick. Becky with a snap mare takeover. Royce negates The Dis-Arm-Her. Becky tells Royce to bring it. Becky with a forearm smash. Becky with a single leg dropkick. Becky plays to the crowd. Royce goes for a double leg takedown, but Becky counters with a backslide cover for a two count. Becky with an arm-drag takeover. Becky talks smack to Asuka. Becky applies an arm-bar. Lacey Evans is watching the match from the backstage area. Becky with a Wrecking Ball Dropkick. Royce responds with a High Knee Strike. Royce transitions into a ground and pound attack.

Royce with the cover for a two count. Royce repeatedly stomps on Becky’s chest. Becky drives her knee into the midsection of Royce. Becky is throwing forearms at Royce. Royce whips Becky to the corner. Royce with a Corner Clothesline. Royce kicks Becky in the chest. Following a snap mare takeover, Royce applies a rear chin lock. Becky gets back to a vertical base. Royce pulls Becky down to the mat. Becky kicks Royce in the jaw. Becky with a Flying Forearm Smash for a two count. Royce is regaining her stamina on the outside.

Royce with a hair whip for a two count. Royce drives her knee into the back of Becky’s neck. Royce goes back to the rear chin lock. Becky is displaying her fighting spirit. Becky uppercuts Royce. Becky with a Lou Thez Press. Becky transitions into a ground and pound attack. Becky hits The BexPloder Suplex. Royce side steps Becky into the turnbuckles. Becky decks Royce with a back elbow smash. Becky follows that with another SpringBoard Side Kick. Royce responds with a Spinning Heel Kick for a two count. Royce goes for a Fisherman’s Buster, but Becky counters with The Dis-Arm-Her to pickup the victory. 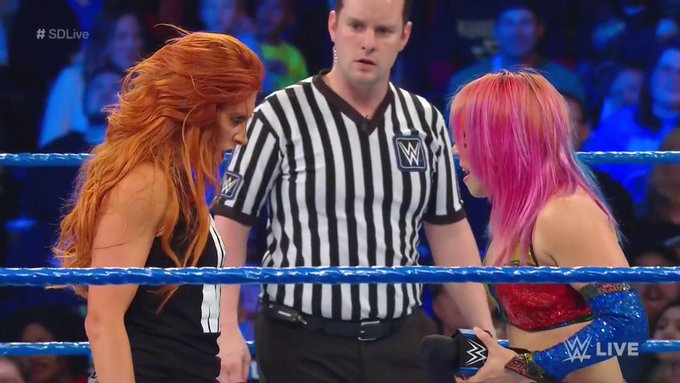 Asuka drags Billie into the ring. Asuka with a flurry of leg kicks. Asuka is playing mind games with Billie. Asuka drops Bille with a Running Hip Attack. Asuka follows that with a Sliding Knee Strike. Asuka applies a Cross ArmBreaker. Asuka transitions into The Dis-Arm-Her. Bille rolls Asuka over for a two count. Asuka makes Billie tap out to The Asuka Lock.

#TheNew @WWEDanielBryan isn't about to let @AJStylesOrg FEED the @WWEUniverse's need to CONSUME on #SDLive! pic.twitter.com/CxteswmafM

When @SamoaJoe decides you're a target, you'll have no choice but to GO TO SLEEP! #SDLive #RoyalRumble pic.twitter.com/IuEPMpcGYK

Collar and Elbow Tie Up. Almas shoves Mysterio. Test of strength. Almas goes for a monkey flip, but Mysterio lands back on his feet. Mysterio with an arm-drag takeover. Almas with a waist lock takedown. Chain grappling exchange in the center of the ring. Almas talks smack to Mysterio. Mysterio applies a side headlock. Mysterio dives over Almas. Mysterio goes back to the side headlock. Almas goes for a Belly to Back Suplex, but Mysterio lands back on his feet. Almas kicks Mysterio in the gut. Almas applies a hammer lock. Mysterio with two sharp elbow strikes. Mysterio goes for a SlingShot Bulldog, but Almas counters with a hammer lock. Almas drives Mysterio shoulder first into the turnbuckles. Mysterio repeatedly kicks the left hamstring of Almas.

Mysterio applies a waist lock. Almas throws Mysterio into the turnbuckles. Almas with a ShotGun Meteora for a two count. Mysterio decks Almas with a back elbow smash. Mysterio drives Almas face first into the middle turnbuckle. Almas gets Mysterio tied in the tree of woe. Mysterio with a Super Hurricanrana off the ring apron. Mysterio follows that with a Flying Seated Senton off the steel ring post. Almas dropkicks Mysterio in mid-air. Mysterio is throwing haymakers at Almas. Mysterio kicks Almas in the chest. Coming out of the commercial break, Mysterio connects with a Sunset Flip PowerBomb for a two count. Almas reverses out of the irish whip from Mysterio.

The Miz, Shane McMahon and The Bar In-Ring Segment:

He may not be dressed for it, but @mikethemiz is TAKING IT to @WWESheamus on #SDLive! pic.twitter.com/Qm0t0voXg2

Collar and Elbow Tie Up. Sheamus backs Miz into the turnbuckles. Sheamus pie faces Miz. Miz fires back with a flurry of jabs. Sheamus reverses out of the irish whip from Miz. Miz dumps Sheamus out of the ring. Miz with a Wrecking Ball Dropkick. Sheamus clotheslines Miz on the floor. Sheamus rolls Miz back into the ring. Sheamus kicks Miz in the chest. Sheamus with clubbing shoulder blocks in the corner. Sheamus drops Miz with a Bicycle Knee Strike. Sheamus follows that with The Ten Beats Of The Bodhran. Miz is regaining his composure on the outside.

Sheamus goes for White Nose, but Miz rolls him over for a two count. Sheamus drives his knee into the midsection of Miz. Sheamus applies a side headlock. Miz with shots to the midsection of Sheamus. Sheamus goes for a Tilt-A-Whirl BackBreaker, but Miz lands back on his feet. Miz goes for The Skull Crushing Finale, but Sheamus blocks it. Miz kicks Sheamus in the jaw. Miz is throwing haymakers at Sheamus. Miz sends Sheamus shoulder first into the steel ring post.

Miz with Two Corner Dropkicks. Sheamus clotheslines Miz. Cesaro attacks Miz behind the referee’s back. Shane McMahon sends Cesaro crashing through the cake table on the floor. Miz rolls Sheamus over to pickup the victory. After the match, Sheamus starts beating down to Miz. Shane makes the save. Shane drops Sheamus with a Spinning Elbow Strike. Miz plants Sheamus with The Skull Crushing Finale. Miz and Shane drags Sheamus to the corner. Shane delivers a Birthday Cake Coast To Coast to end the show.

Winner: The Miz via Pinfall 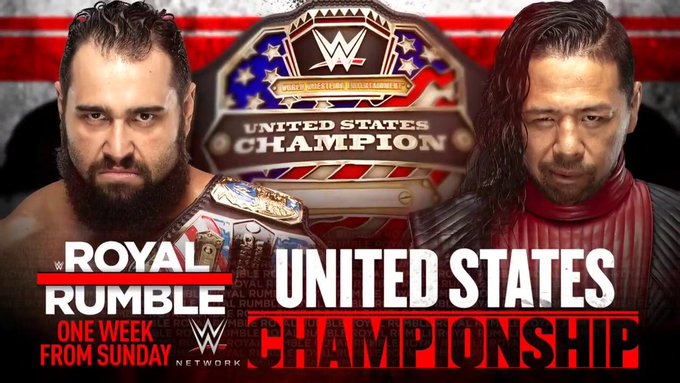